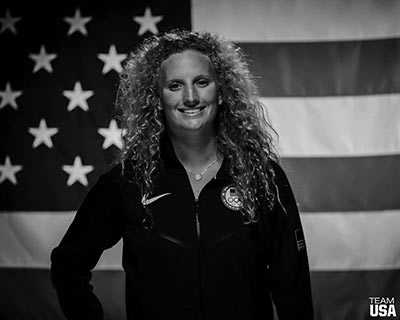 Fondest Memory: The moment I hugged my family after I won an Olympic gold medal. So much emotion. They have been apart of the journey since day one and are my biggest fans. My dreams became their dreams and to be able to make it a reality was the best moment of my life.

Soundtrack: Adele, Modest Mouse, Bon Iver, Jack Johnson, Quinn to Top 40... My music is all over the place.

Retreat: Getting in the water, whether it's the pool or the ocean always recharges me. I also journal daily, which helps reflect and be appreciative while also being self critical and holding myself accountable.

Wildest Dream: To accomplish all the crazy goals and dreams I've set out for myself and to do it in the most positive way possible. To inspire people of all ages to have the courage to go after the dreams.

Proudest Moment: Listening to the national anthem with the gold medal around my neck, next to teammates who became sisters and in front of my friends and family in the stands. I've never been prouder to be an American and represent the USA on the World stage. August 19th, 2016 a lifelong dream came true and a lot of that is due to so many people that go unnoticed. Thanks to the team behind the team.

Biggest Challenge: Balancing two sports at an elite level while trying to be a good friend, family member and all around human being, but I wouldn't change it for the World.

Perfect Day: Up before the sun with Alta coffee in my hand, early surf on one of those epic peaky combo swells at 54th street, or big fun 28th street lefts with the crew out (you know who you are), breaky at Al Cap talking story with the boys, back out for another surf, then Balboa Bay Club for a swim and workout, followed by picking up Bearflag and taking the Duffy out for a bay cruise as the sun is setting with my best friends.

Why the Young & Brave Foundation: Because of what it stands for. Cancer is a terrible thing and no person deserves to fight the disease alone. Because of Matt and the Young and Brave's passion for the cause. Because I want to make a difference in the World and this foundation will help me do that. Because LOVE cures all.

Menu
Total Donations to Warriors is a live counter of all donations made to our Warriors and Families since we filed for non profit status back in 2011. None of this could be possible with out the support of our generous donors and community.